“As we’ve seen what’s going on in today’s recent events in Egypt and certainly that broader region, reminds us all how crucial it is to have top notch leadership on the ground, and how quickly that ground can shift under our feet. It is by no means 100% clear that social media technology is going to make things better, but one thing we know for sure: It’s going to change things,” said the Secretary of State.” 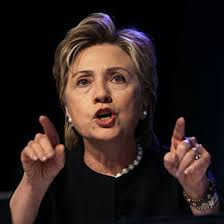 Speaking to an audience of nearly every American ambassador, Clinton referred to the unrest gripping the Arab world in emphasizing the importance of U.S. “civilian power.” She said U.S. diplomacy needed to be more nimble, innovative and accountable than ever before.

“What’s going on today—recent events in Egypt and certainly in that broader region—remind us all how crucial it is to have top-notch leadership on the ground and how quickly the ground can shift under our feet,” Clinton told the gathering of diplomats at the State Department.

Clinton said officials would have to accept that positions and resources would need to be shifted to where they are needed most, from the fragile states of Afghanistan and Iraq to Pakistan, where she said the volume of false claims about the United States makes responding difficult.

Referring to the release of confidential U.S. diplomatic cables by the WikiLeaks website, Clinton said ambassadors needed to adapt to a “fast-changing world” that includes theft, protests and technological developments that have the capacity to change the lives of millions of people.

“We are all in unchartered territory,” Clinton said.

She urged ambassadors to embrace the potential of Facebook, Twitter and other forums to better project the American message to people around the world.

“Social media . is going to change things and if we are not on top of it and driving the message and responding to it as effectively as we can, we are going to be left behind,” Clinton said. Article Source

Secretary of State Clinton warns of a “perfect storm of powerful trends” across the region, including a young population, political repression, economic disparity, and dwindling supplies of oil and water.

As events in Cairo moved steadily – perhaps inexorably – toward a quick end to the 30-year regime of Hosni Mubarak, the United States continued to do what it could to push things in that direction without appearing to orchestrate what is

amounting to political revolution in Egypt.

Speaking from a security conference in Munich, Secretary of State Hillary Clinton warned of a “perfect storm of powerful trends” across the region, including a young population, political repression, economic disparity, and dwindling supplies of oil and water.

“This is what has driven demonstrators into the streets of Tunis, Cairo, and cities throughout the region,” Clinton said in her speech Saturday.

“Some leaders may believe that their country is an exception – that their people will not demand greater political or economic opportunities, or that they can be placated with half-measures,” she said. “In the short term, that may be true; but in the long term that is untenable.”

There were some tense moments, however.

Late Friday, Fox News network reported an unsuccessful assassination attempt against Vice President Omar Suleiman, in which two of his bodyguards were said to have been killed. Egyptian officials denied that, and no other news agency was able to confirm the Fox report.

An explosion at a gas terminal in Egypt’s Sinai Peninsula early Saturday was caused by a gas leak and not a terrorist attack, officials said.

IN PICTURES: Rulers of Egypt

At Tahrir Square in Cairo Saturday, protesters at one point formed a human chain to block two tanks from opening the square to traffic. After making an unsuccessful appeal to protesters, Gen. Hassan Al Roweni left the area.

“The ruling party leaders who resigned included the country’s most powerful political figures – and its most unpopular among many Egyptians,” the Associated Press reported. “The move may have been aimed at convincing protesters in the streets that the regime is sincere in implementing democratic reforms they demand.”

US special envoy Frank Wisner said Gamal Mubarak’s resignation was a positive step. “There is a chance to move forward. It’s fragile, it’s the first stage, things could go wrong. But the direction is promising,” he told the BBC.

Still, the party resignations as reported by Egyptian state television did not include Hosni Mubarak himself, who appears to remain in power. And the announcement certainly did not satisfy the protestors, who have vowed to remain in Tahrir Square until Mubarak leaves. To many there, such concessions on the part of the Mubarak regime are simply signs of further weakness.

Mubarak and his supporters have consistently claimed that the protest-turned-revolution could destabilize the country (and the region), leading perhaps to the rise of religious fundamentalism as a politically powerful force.

In her speech in Munich Saturday, Secretary Clinton turned that argument around.

“If the events of these past few weeks prove anything, it is that the governments who consistently deny their people freedom and opportunity are the ones who will, in the end, open the door to instability,” she warned.

Meanwhile, the Obama administration is supporting Vice President Suleiman’s effort to find a way toward resolution with antigovernment forces, including fresh elections and Mubarak’s departure.

“That takes some time,” Clinton said. “There are certain things that have to be done in order to prepare.” source