Gen. Hassan al-Roueini, military commander for the Cairo area, tells thousands of protesters in central Tahrir Square: “All your demands will be met today.” 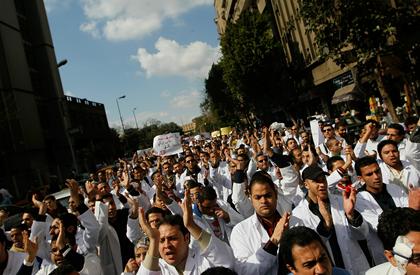 Many among the flag-waving protesters held up a V-for-victory sign and shouted, “Allahu akbar,” or “God is great,” the Associated Press reports.

In addition, the head of the ruling party, Hossam Badrawi, tells the AP that he expects President Hosni Mubarak will “address the people tonight to respond to protesters demands.”

Update at 10:45 a.m. ET: NBC says Mubarak will make a statement this evening and step down. A statement by the armed forces on Egyptian state TV says the military convened the supreme council of the armed forces “to safeguard people and protect their interest.” Al-Jazeera TV notes that Mubarak was not shown attending that meeting.

In its statement, the military says it the council will remain in session indefinitely during the crisis. It says the decision was made in response to “legitimate” popular demands.

Update at 10:37 a.m. ET: NBC’s Richard Engel says two independent sources have confirmed that Mubarak will step down. In addition, the armed forces supreme council has convened to begin the orderly transition of power, NBC says.

CAPTIONBy Amr Nabil, AP
Egyptian President Hosni Mubarak will step down tonight and that Vice President Omar Suleiman will take over as president.

Earlier posts: A senior Egyptian army commander has told protesters that all their demands will be met, the Associated Press reports.

At the same time, Egypt’s supreme council of armed forces is meeting to discuss its position on the crisis in Egypt, Al-Jazeera network reports.

Al-Jazeera confirms the AP report and says the army will make a statement later today. SOURCE

← US & France: Arabic Is the Language of the Future!
Heart Disease Stalks Both Genders →