keep order, it was claimed today. Estimates suggest 104 people have die but a doctor in the Libyan city of Benghazi, where the disturbances have been at their worst, said that at least 200 have died in his hospital since the unrest began. The true figure is almost impossible to quantify as journalists have been expelled from the country Read more 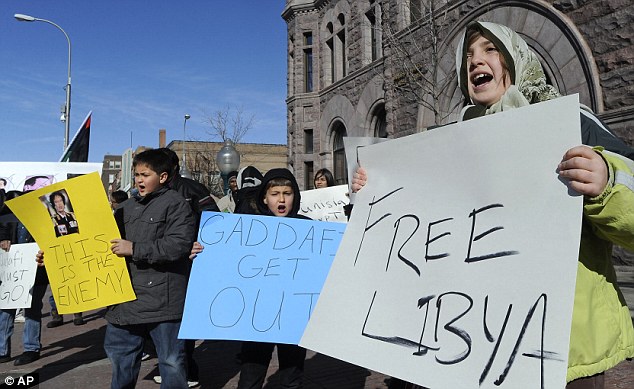 Voice of the young: One of the few pictures of anti-government uprisings to emerge from the repressive North African

Funerals in Libya for Dozens Killed in Protests Residents of Tripoli reported in telephone interviews Sunday that there had been smaller uprisings in three working class suburbs of the capitol, all quickly crushed by security forces. By Sunday morning, the number of confirmed deaths around the country had risen to at least 173 people, most of them in Benghazi, Human Rights Watch reported. The escalating violence in Benghazi — Libyans spoke of a “massacre,” though details could not be confirmed — appeared to mark a decisive turn in days of protests that have shaken Libya, a North African nation rich in oil. By nightfall, a deadly cycle had clearly emerged in a city where thousands have gathered in antigovernment demonstrations: Security forces fired on funeral marches, killing more protesters, creating more funerals. more

Gadhafi tries to crush Libyan protests with brute force BY WARREN P. STROBEL AND ERIKA BOLSTAD MCCLATCHY NEWSPAPERS WASHINGTON — Of all the revolutions and attempted revolutions sweeping the Middle East, the one in Libya is the murkiest. It’s taking place in a police state, ruled by one man since 1969, where the handful of foreign journalists are barred from leaving the capital, outgoing international phone service is shut off and, as of early Saturday, the Internet

was shut down. Yet the picture emerging is a grim one: leader Moammar Gadhafi’s security troops and foreign mercenaries are using murderous force to try to quell a popular revolt that continues to shake the eastern half of the oil-rich North African country. Residents said there was fresh violence Saturday in Benghazi, Libya’s second city, when regime security forces – possibly snipers – fired on protesters marching in funeral processions for those killed the day before. “Today, it’s a real massacre out there,” said Braikah, who like most Libyans contacted did not want her full name published. She’s a doctor at a Benghazi hospital where the wounded were being taken, calls for blood donations were going out and gifts of food and water for the staff were flowing in. Braikah had no estimate of the dead and wounded. The respected organization Human Rights Watch reported late Friday that 84 people had been killed in the preceding three days of Libyan unrest. That figure grew Saturday, with some sources saying there were tens more deaths in Benghazi alone. Accounts of events in Libya come from telephone interviews with residents and expatriates with contacts in the country; human rights groups; and postings on Internet services such as Twitter, which cannot always be independently confirmed. Whether Gadhafi can crush the biggest threat to his eccentric 42-year rule – which has included military clashes with the United States and responsibility for the 1988 bombing of a Pan American jetliner over Lockerbie, Scotland – remains to be seen. Unlike in Cairo’s Tahrir Square, where protesters gathered by the thousands to oust President Hosni Mubarak in neighboring Egypt, the international media’s TV cameras aren’t trained on Libya. Still, as British Foreign Secretary William Hague said, in the age of Twitter and YouTube, “that does not mean the world is not watching.” Ali, a doctor in the eastern city of al Bayda, pleaded by phone for help in restoring Internet connections, and for United Nations’ attention to the bloodshed. With local police having defected to the peoples’ side, Gadhafi has sent in mercenaries from nearby African countries who were roaming the streets shooting civilians, he said. “It’s really, really, really bad. You cannot imagine,” he said. “There’s no media here,” he said. “There’s no BBC. There’s no CNN. There’s no Al Jazeera.” In the city of Shahhat, about 10 miles east of al Bayda, locals killed two African mercenaries and captured three others, Ali said. The survivors were French speakers; two said they were from Chad, and one from Niger. Such accounts appeared to be bolstered by a video posted on YouTube showing a dead black man spattered in blood and wearing a camouflage uniform. 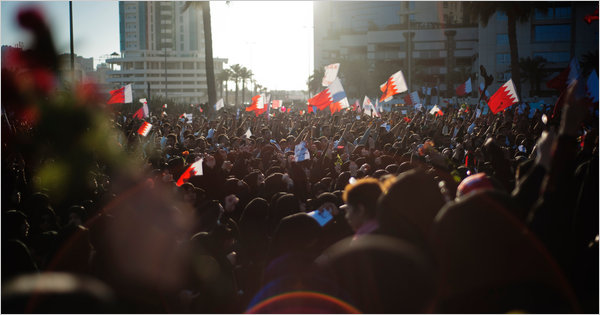 Ali said he saw 16 dead bodies at the hospital in al Bayda on Saturday, along with so many injured that some had to be lodged in the hospital’s garden. Eastern Libya has long had an uncertain loyalty to the capital, Tripoli. Gadhafi’s support in Tripoli is thought to remain strong, and reports of unrest in the capital haven’t been confirmed. President Barack Obama in a statement Friday expressed concern about violent suppression of demonstrations in Libya, Bahrain and Yemen. But he has yet to speak directly or in detail about the massacres in Libya. Former Libyan diplomat Ibrahim Sahad, 66, who was among a group of protesters in front of the White House on Saturday, said he was concerned at the U.S. silence. Sahad, who served as Libyan charge d’affairs in Argentina until he sought political asylum in the United States in the late 1970s, suggested that the U.S. government send home the Libyan ambassador in Washington. “I would like to call on all the democratic governments in the world, the governments of the European Union and the United States, to stand with the people of Libya,” he said. “The last call I received from Benghazi said, ‘please help us!’ ” Sahad said. Khaled Ghoneim, 38, who traveled to Washington from Lexington, Ky., with his two daughters, said Americans with ties to Libya are watching closely for any hint of news. They lost contact with their family in Derna, which is near Benghazi. And they’re concerned about reaching out because they fear landlines are monitored, Ghoneim said. He and many of the others gathered at the protest said they hoped the protests would lead to a change in regime. “We are hoping in a few months to meet in Libya,” said Ghoneim, who left the country with his family when he was 5 years old. source