For nearly two decades, the leaders of Al Qaeda have denounced the Arab world’s dictators as heretics and puppets of the West and called for their downfall. Now, people in country after country have risen to topple their leaders — and Al Qaeda has played absolutely no role.

In fact, the motley opposition movements that have appeared so suddenly and proved so powerful have shunned the  two central tenets of the Qaeda credo: murderous violence and religious fanaticism. The demonstrators have used 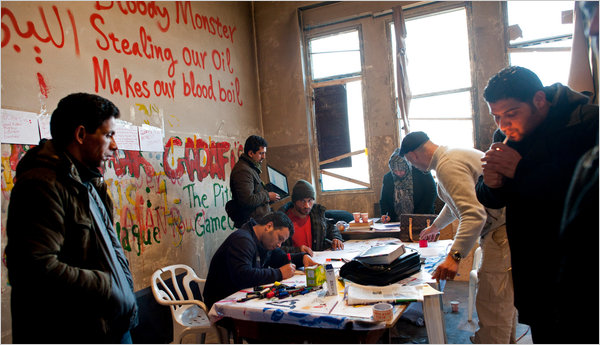 force defensively, treated Islam as an afterthought and embraced democracy, which is anathema to Osama bin Laden and his followers.

So for Al Qaeda — and perhaps no less for the American policies that have been built around the threat it poses — the democratic revolutions that have gripped the world’s attention present a crossroads. Will the terrorist network shrivel slowly to irrelevance? Or will it find a way to exploit the chaos produced by political upheaval and the disappointment that will inevitably follow hopes now raised so high?

For many specialists on terrorism and the Middle East, though not all, the past few weeks have the makings of an epochal disaster for Al Qaeda, making the jihadists look like ineffectual bystanders to history while offering young Muslims an appealing alternative to terrorism.

“So far — and I emphasize so far — the score card looks pretty terrible for Al Qaeda,” said Paul R. Pillar, who studied terrorism and the Middle East for nearly three decades at the C.I.A. and is now at Georgetown University. “Democracy is bad news for terrorists. The more peaceful channels people have to express grievances and pursue their goals, the less likely they are to turn to violence.”

If the terrorists network’s leaders hope to seize the moment, they have been slow off the mark. Mr. bin Laden has been silent. His Egyptian deputy, Ayman al-Zawahri, has issued three rambling statements from his presumed hide-out in the Pakistan-Afghanistan border region that seemed oddly out of sync with the news, not noting the ouster of President Hosni Mubarak of Egypt, whose government detained and tortured Mr. Zawahri in the 1980s.

“Knocking off Mubarak has been Zawahri’s goal for more than 20 years, and he was unable to achieve it,” said Brian Fishman, a terrorism expert at the New America Foundation. “Now a nonviolent, nonreligious, pro-democracy movement got rid of him in a matter of weeks. It’s a major problem for Al Qaeda.”

The Arab revolutions, of course, remain very much a work in progress, as the Libyan leader, Col. Muammar el-Qaddafi, orders a bloody defense of Tripoli, and Yemen’s president, Ali Abdullah Saleh, negotiates to cling to power. The breakdown of order could create havens for terrorist cells, at least for a time — a hazard both Colonel Qaddafi and Mr. Saleh have prevented, winning the gratitude of the American government.

“There’s an operational advantage for militants in any place where law enforcement and domestic security are weak and distracted,” said Steven Simon, a fellow at the Council on Foreign Relations and co-author of “The Age of Sacred Terror.” But over all, he said, developments in the Arab countries are a strategic defeat for violent jihadism.

“These uprisings have shown that the new generation is not terribly interested in Al Qaeda’s ideology,” Mr. Simon said. He called the Zawahri statements “forlorn, if not pathetic.”

There is evidence that the uprisings have enthralled some jihadists. One Algerian man associated with Al Qaeda in the Islamic Maghreb, the network’s North African affiliate, welcomed the uprisings in a weekend interview and said militants were returning from exile to join the battle in Libya, arming themselves from government weapons caches.

“Since the land is in chaos and Qaddafi is helping through his reactions and actions to increase the hatred of the population against him, it will be easier for us to recruit new members,” said the Algerian man, who uses the nom de guerre Abu Salman. He said that Libyans and Tunisians who had fought in Iraq or Afghanistan were now considering a return home.

“There is lots of work to do,” he said. “We have to help the people fighting and then build an Islamic state.”

Abu Khaled, a Jordanian jihadist who fought in Iraq with the insurgent leader Abu Musab al-Zarqawi, suggested that Al Qaeda would benefit in the long run from dashed hopes.

“At the end of the day, how much change will there really be in Egypt and other countries?” he asked. “There will be many disappointed demonstrators, and that’s when they will realize what the only alternative is. We are certain that this will all play into our hands.”

Michael Scheuer, author of a new biography of Mr. bin Laden and head of the C.I.A.’s bin Laden unit in the late 1990s, thinks such enthusiasm is more than wishful thinking.

Mr. Scheuer says he believes that Americans, including many experts, have wildly misjudged the uprisings by focusing on the secular, English-speaking, Westernized protesters who are a natural draw for television. Thousands of Islamists have been released from prisons in Egypt alone, and the ouster of Al Qaeda’s enemy, Mr. Mubarak, will help revitalize every stripe of Islamism, including that of Al Qaeda and its allies, he said.

“The talent of an organization is not just leadership, but taking advantage of opportunities,” Mr. Scheuer said. In Al Qaeda and its allies, he said, “We’re looking over all at a more geographically widespread, probably numerically bigger and certainly more influential movement than in 2001.”

If Al Qaeda faces an uncertain moment, so does the Obama administration. For a decade, the United States has been preoccupied with the Muslim world as a source of terrorist violence — one reason both the Bush and Obama administrations had friendly relations with the authoritarian governments now under fire.

It was such a dominant theme of American policy that even Colonel Qaddafi, the quixotic and brutal Libyan leader who President Obama said Saturday should step down, had drawn American praise as a bulwark against jihadists. A cable from the American Embassy in Tripoli briefing Secretary of State Condoleezza Rice before a 2008 visit called Libya “a strong partner in the war against terrorism,” noting “excellent” intelligence cooperation and specifically lauding Colonel Qaddafi’s efforts to block the return of Libyan militants from Afghanistan and Iraq and to “blunt the ideological appeal of radical Islam.”

Such perceived dividends of cooperation with the likes of Colonel Qaddafi are now history, and that is a point not lost on the C.I.A., the State Department and the White House. As during the United States’ halting adjustment to the fall of Communist governments from 1989 to 1991, officials are scrambling to balance day-to-day crisis management with consideration of how American policy must adjust for the long term.

“There has to be a major rethinking of how the U.S. engages with that part of the world,” said Christopher Boucek, who studies the Middle East at the Carnegie Endowment for International Peace. “We have to make clear that our security no longer comes at the expense of poor governance and no rights for the people in those countries.