Washington Post Staff Writer
Tuesday, March 8, 2011; 12:49 PM
During the chaotic days after the Sept. 11, 2001, terrorist attacks, Basim Elkarra was passing by an Islamic school in Sacramento when he did a double-take: The windows were covered with thousands of origami paper cranes – peace symbols that had been folded and donated by Japanese Americans.

Amid the anger and suspicions being aimed at Muslims at that time, the show of support “was a powerful symbol that no one will ever forget,” said Elkarra, a Muslim American community leader in California.

It was also the beginning of an unlikely bond between the two groups that has intensified as House Homeland Security Committee Chairman Peter T. King (R-N.Y.) prepares to launch a series of controversial hearings Thursday on radical Islam in the United States.

Spurred by memories of the World War II-era roundup and internment of 110,000 of their own people, Japanese Americans, especially on the West Coast, have been among the most vocal and passionate supporters of embattled Muslims. They’ve rallied public support against hate crimes at mosques, signed on to legal briefs opposing the indefinite detention of Muslims by the government, organized cross-cultural trips to the Manzanar internment camp memorial in California and held “Bridging Communities” workshops in Islamic schools and on college campuses.

“Rep. King’s intent seems clear: To cast suspicion upon all Muslim Americans and to stoke the fires of anti-Muslim prejudice and Islamophobia,” Honda wrote in an op-ed published by the San Francisco Chronicle.

King has defended the hearings by arguing that the Muslim American community has not always been cooperative with the FBI and other law enforcement authorities in countering the growth of radical Islam. And he rejects accusations that he is demonizing Muslims and ignoring threats from other extremists.

In an interview on CNN on Sunday, King noted that U.S. Attorney General Eric H. Holder Jr. “is not saying he’s staying awake at night because of what’s coming from anti-abortion demonstrators or coming from environmental extremists or from neo-Nazis. It’s the radicalization right now in the Muslim community.”

But Honda compared King’s position not only to the wartime roundup of the Japanese but also to the anti-Communist hearings staged by Sen. Joseph McCarthy in the 1950s.

“I’ll be damned if I’m going to stay quiet and not say something,” Honda said in an interview this week. “We have to show people that as Americans, we’re not going to put up with this kind of nonsense.”

Though the youngest internees are in their late 60s and early 70s, Japanese Americans remember what it means to be targeted by nationality during wartime.

After the Japanese attack on Pearl Harbor in December 1941, President Franklin D. Roosevelt ordered that all ethnic

Japanese along the Pacific Coast be sent to one of 10 isolated internment camps in seven states. Of those imprisoned, 62 percent were second- and third-generation Japanese Americans born in the United States. Most lost their property to the government.

In 1988, Congress approved legislation that apologized and distributed $1.6 billion in reparations for internment, blaming the roundup on “race prejudice, war hysteria, and a failure of political leadership.”

It was the memory of the camps that led the Japanese to reach out to their Muslim counterparts, said Kathy Masaoka, a high school teacher who co-chairs the Los Angeles chapter of the Nikkei for Civil Rights and Redress.

“It dawned on us that this is really something that could escalate among Muslims, the same things our parents faced,” she said. “They were being scapegoated.”

“They see clearly that they have similar experiences,” said Affad Shaikh, civil rights manager for the Council on American-Islamic Relations. “Even though the target group of the discrimination is different, the purpose of that harassment is the same.” 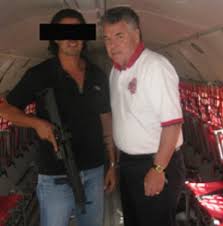 In Sacramento, CAIR and the Japanese American Citizens League sponsor an annual 350-mile bus trip to visit the Manzanar internment camp near the Sierra Nevada mountains in California. More than 10,000 Japanese were interned there, an ordeal recounted in “Farewell to Manzanar,” a well-known 1983 memoir by Jeanne Wakatsuki Houston and James D. Houston.

“When we met with the former internees, they told us how they coped,” said Elkarra, president of CAIR’s Sacramento Valley chapter. “The challenges they faced were a lot more difficult than anything we faced.”

Although the alliance between the two groups is rooted on the West Coast, it has also been on display in Washington, where the Japanese American Citizens League is headquartered. The league has worked with Arab American groups on the issue of racial profiling, meeting with the Department of Justice to urge officials not to detain people on the basis of race or religion, said Floyd Mori, the league’s national executive director.

As King’s congressional hearings have drawn near, Japanese American groups have condemned him. Last week Mori co-authored an op-ed with Deepa Iyer, executive director of South Asian Americans Leading Together, that said the hearings “will do nothing but perpetuate an atmosphere of alienation, suspicion and fear.”

Mori, who will be in Los Angeles on Thursday, said he will send a staff member to the hearing. Honda, too, will be monitoring it, though he has not asked to testify and has not spoken with King about his concerns.

“We just feel very strongly that it does kind of point back to the time when just because we were of Japanese ancestry, people looked upon us with hate and terror,” Mori said. “This kind of hearing simply flames that kind of fire today.ARTICLE :SOURCE

← The Signs Before Day of Judgement [Part 1]
Bone Marrow Drive →