In light of Friday’s tsunami following the Japan earthquake, find out how the killer waves are caused, what the warning signs are, and how to respond when a tsunami threatens. (Watch a tsunami video.)

A huge tsunami spawned by the magnitude-8.9 quake—one of the largest ever recorded—rocked Japan’s eastern coast, killing hundreds of people, according to the Associated Press.

(Get the inside story of how nations rally to aid others after earthquakes, tsunamis, and other natural disasters.)

Within hours, the tsunami hit Hawaii and set off warnings throughout the Pacific, including South America, Canada, Alaska, and the U.S., such as the Oregon coast, the AP reported. (See more tsunami pictures.)

• A tsunami is a series of great sea waves caused by an underwaterearthquake, landslide, or volcanic eruption. More rarely, a tsunami can be generated by a giant meteor impact with the ocean.

• Scientists have found traces of an asteroid-collision event that they say would have created a giant tsunami that swept around the Earth several times, inundating everything except the tallest mountains 3.5 billion years ago. The coastline of the continents was changed drastically and almost all life on land was exterminated. (Read the story.)

cause substantial and sudden displacement of a massive amount of water.

• Tsunami (pronounced soo-NAH-mee) is a Japanese word, and in fact tsunamis are fairly common in Japan. Many thousands of Japanese have been killed by them in recent centuries. (Take a tsunami quiz.)

• A tsunami is not a single wave but a series of waves, also known as a wave train. The first wave in a tsunami is not necessarily the most destructive. Tsunamis are not tidal waves.

• Tsunami waves can be as long as 60 miles (100 kilometers) and as far as one hour apart. They are able to cross entire oceans without great loss of energy. The 2004 Indian Ocean tsunami traveled as far as 3,000 miles (nearly 5,000 kilometers) to Africa, arriving with sufficient force to kill people and destroy property.

Scientists say that a great earthquake of magnitude 9 struck the Pacific Northwest in 1700 and created a tsunami that caused flooding and damage on the Pacific coast of Japan. (See “Did North American Quake Cause 1700 Japanese Tsunami?”)

Tsunamis As Fast as Commercial Jets

• Where the ocean is deep, tsunamis can travel unnoticed on the surface at speeds up to 500 miles an hour (800 kilometers an hour), crossing an ocean in a day or less. Scientists are able to calculate arrival time of a tsunami in different parts of the world based on knowledge of water depths, distances, and when the event that generated the tsunami occurred.

(More from National Geographic magazine: predicting the next giant earthquake.)

• A tsunami may be less than a foot (30 centimeters) tall on the surface of the open ocean, which is why they are not noticed by sailors. But the powerful shock wave of energy travels rapidly through the ocean, sometimes as fast as a commercial jet. Once a tsunami reaches shallow water near the coast, it is slowed down. The top of the wave moves faster than the bottom, causing the sea to rise dramatically.

• Geological features such as reefs, bays, river entrances, and undersea formations may dissipate the energy of a tsunami. In some places a tsunami may cause the sea to rise vertically only a few inches or feet. In other places tsunamis have been known to surge vertically as high as 100 feet (30 meters). Most tsunamis cause the sea to rise no more than 10 feet (3 meters).

The Indian Ocean tsunami of December 2004 caused waves as high as 30 feet (9 meters) in some places, according to news reports. In other places witnesses described a rapid surging of the ocean.

Flooding can extend inland by a thousand feet (300 meters) or more. The enormous energy of a tsunami can lift giant boulders, flip vehicles, and demolish houses.

• Tsunamis do not necessarily make their final approach to land as a series of giant breaking waves. They may be more like a very rapidly rising tide. This may be accompanied by much underwater turbulence, sucking people under and tossing heavy objects around. Entire beaches have been stripped away by tsunamis.

Many witnesses have said a tsunami sounds like a freight train.

• The 2004 Indian Ocean tsunami could rank as the most devastating on record. More than 200,000 people lost their lives, many of them washed out to sea.

• The Pacific is by far the most active tsunami zone, according to the U.S. National Oceanic and Atmospheric Administration (NOAA). But tsunamis have been generated in other bodies of water, including the Caribbean and Mediterranean Seas, and the Indian and Atlantic Oceans.

North Atlantic tsunamis include the tsunami associated with the 1775 Lisbon earthquake, which killed as many as 60,000 people in Portugal, Spain, and North Africa. This quake caused a tsunami as high as 23 feet (7 meters) in the Caribbean.

• The Caribbean has been hit by 37 verified tsunamis since 1498. Some were generated locally and others were the result of events far away, such as the 1775 earthquake near Portugal. The combined death toll from these Caribbean tsunamis is about 9,500.

• Large tsunami waves were generated in the Marmara Sea in Turkey after the Izmit earthquake of 1999.

• An earthquake is a natural tsunami warning. If you feel a strong quake do not stay close to shore. If you hear of an earthquake be aware of the possibility of a tsunami and listen to the radio or television for additional information. Remember that an earthquake can trigger killer waves thousands of miles across the ocean many hours after the event generated a tsunami.

• Witnesses have reported that an approaching tsunami is sometimes preceded by a noticeable fall or rise in the water level. If you see the ocean receding unusually rapidly, that’s a good sign that a tsunami may be on its way. Go to high ground immediately.

Many people were killed by the Indian Ocean tsunami because they went down to the beach to view the retreating ocean exposing the seafloor. Experts believe that a receding ocean may give people as much as five minutes’ warning to evacuate the area.

• Remember that a tsunami is a series of waves and that the first wave may not be the most dangerous. The danger from a tsunami can last for several hours after the arrival of the first wave. A tsunami wave train may come as a series of surges that are five minutes to an hour apart. The cycle may be marked by a repeated retreat and advance of the ocean. Stay out of danger until you hear it is safe.

•Survivors of the Indian Ocean tsunami reported that the sea surged out as fast and as powerfully as it came ashore. Many people were seen being swept out to sea when the ocean retreated.

• A tsunami surge may be small at one point of the shore and large at another point a short distance away. Do not assume that because there is minimal sign of a tsunami in one place it will be like that everywhere else.

• NOAA advises that, since tsunami wave activity is imperceptible in the open ocean, vessels should not return to port if they are at sea and a tsunami warning has been issued for the area. Tsunamis can cause rapid changes in water level and unpredictable, dangerous currents in harbors and ports.

Boat owners may want to take their vessels out to sea if there is time and if the sailors are allowed to do so by port authorities. People should not stay on boats moored in harbors. Tsunamis often destroy boats and leave them wrecked above the normal waterline.

• Heightened awareness of the potential for a tsunami to inundate the U.S. western coastline has caused NOAA, the U.S. Geological Survey, and the Federal Emergency Management Administration to initiate a program to predict tsunamis more accurately. As a tsunami traverses the ocean, a network of sensitive recorders on the sea floor measures pressure changes in the overhead water, sending the information to sensors on buoys, which in turn relay the data to satellites for immediate transmission to warning centers.

• The Pacific Tsunami Warning System (TWS), composed of 26 member countries, monitors seismological and tidal stations throughout the Pacific region. The system evaluates potentially tsunami-causing earthquakes and issues tsunami warnings. An international warning system for tsunamis in the Indian Ocean was launched in June 2006.

• Use your common sense. If you feel or hear of a strong earthquake do not wait for an official tsunami warning. Tell your family and friends to join you in leaving for high ground. source 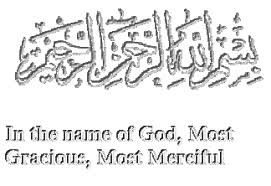 When the earth is shaken with its [final] earthquake

And the earth discharges its burdens

That Day, it will report its news

Because your Lord has commanded it.

That Day, the people will depart separated [into categories] to be shown [the result of] their deeds.

So whoever does an atom’s weight of good will see it,

And whoever does an atom’s weight of evil will see it.