The Signs Before Day of Judgement [Part 2]

Abu Hurayrah said, “The Prophet said, ‘Hasten to do good deeds before six things happen: the rising of the sun from the West, the smoke, the Dajjal, the beast, the (death) of one of you, or general tribulation.’” (Ahmad, Muslim.) 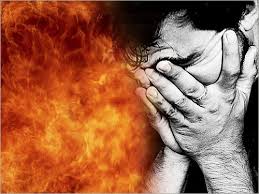 The Battle with the Romans:

After the battle with the Romans, which ended with the conquest of Constantinople, the Dajjal will appear, and Jesus son of Mary will descend from Heaven to the earth, to the white minaret in the east of Damascus, at the time of Salat al-Fajr (the morning prayer), as we shall see in the Sahih Traditions.


Yusayr ibn Jabir said, “Once there was a red storm in Kufah. A man came who had nothing to say except, ‘O ‘Abd Allah ibn Mas’ud, has the Hour come?” ‘Abd Allah was sitting reclining against something, and said, ‘The Hour will not come until people will not divide inheritance, nor rejoice over booty.’ Pointing towards Syria, he said. ‘An enemy will gather forces against the Muslims and the Muslims will gather forces against them.’ I asked, ‘Do you mean the Romans?’ He said, ‘Yes. At that time there will be very heavy fighting. The Muslims will prepare a detachment to fight to the death; they will not return unless they are victorious. They will fight until night intervenes. Both sides will return without being victorious; then many will be killed on both sides. On the fourth day, the Muslims who are left will return to the fight, and Allah will cause the enemy to be routed. There will be a battle the like of which has never been seen, so that even if a bird were to pass their ranks, it would fall down dead before it reached the end of them. Out of a family of one hundred, only one man will survive, so how could he enjoy the booty or divide any inheritance? While they are in this state, they will hear of an even worse calamity. A cry will reach them: “The Dajjal  ( English: Antichrist) has taken your place among your offspring.” So they will throw away whatever is in their hands and go forward, sending 10 horsemen as a scouting party. The Prophet said, ‘I know their names, and the names of their fathers, and the colours of their horses. They will be the best horsemen on the face of the earth on that day.’ ” (Ahmad, Muslim).

Abu Hurayrah said, “The Prophet said, ‘The Hour will not come until the Romans camp at al-A’mash or Dabiq. An army, composed of the best people on earth at that time, will come out from Madinah to meet them. When they have arranged themselves in ranks, the Romans will say, ‘Do not stand between us and those who took prisoners from amongst us. Let us fight with them.’ One-third will run away, and Allah will never forgive them. One-third will be killed, and

they will be the best of martyrs in Allah’s sight. One-third, who will never be subjected to trials or tribulations, will win, and will conquer Constantinople. Whilst they are sharing out the booty, after hanging their swords on the olive-trees, Satan will shout to them that the Dajjal has taken their place among their families. When they come to Syria, the Dajjal ( English: Antichrist or the False Lord)  will appear, while they are preparing for battle and drawing up the ranks. When the time for prayer comes, Jesus the son of Mary will descend and lead them in prayer. When the enemy of Allah (i.e. the Dajjal) sees him, he will start to dissolve like salt in water, but Allah will kill him.’ ” (Muslim.)

When Mustawrid al-Qurashi was sitting with ‘Amr ibn al-‘As, he said, “I heard the Prophet say, ‘The Hour will come when the Romans will be in the majority.’ ‘Amr asked him, “What are you saying?” He said, “I am repeating that which I heard from the Prophet.” ‘Amr said, “If you say this, it is true, because they have four good characteristics: they are the most able to cope with tribulation, the quickest to recover after disaster and to return to the fight after disaster, and are the best as far as treating the poor, weak and orphans is concerned. They have a fifth characteristic which is very good; they do not allow themselves to be oppressed by their kings.”

Abu Hurayrah said, “The Prophet said about Madinah: ‘Neither plague nor the Dajjal can enter it.’ ” (Bukhari.)

First of all, we will quote the reports which mention the liars and “dajjals” who will precede the coming off the Dajjal,  (or Antichrist), who will be the last of them; may Allah curse them and punish them with Hell-fire.
Jabir ibn Samurah said, “I heard the Prophet say, ‘Just before the Hour there will be many liars.'” Jabir said, “Be on your guard against them.” (Muslim).

Abu Hurayrah said, “The Prophet said, ‘The Hour will not come … until nearly 30 “dajjals” (liars) appear, each one claiming to be a messenger from Allah.'” (Bukhari Muslim.)

Anas ibn Malik said, “The Prophet said, ‘The time of the Dajjal will be years of confusion. People will believe a liar, and disbelieve one who tells the truth. People will distrust one who is trustworthy, and trust one who is treacherous; and the Ruwaybidah will have a say.’ Someone asked, ‘Who are the Ruwaybidah?’ He said, ‘Those who rebel against Allah and will have a say in general affairs.'”  sane ( Hassan)  Hadith  (Ahmad.) source

← Truthfulness
“What is the Evidence Pointing to the Existence of God? (4) →