Washington (CNN) – Ten years after 9/11, Americans are wrestling with their opinions of Muslims, a new survey found, and where Americans get their TV news is playing a role in those opinions.

Forty-seven percent of survey respondents said the values of Islam are at odds with American values.

The Public Religion Research Institute and the Brookings Institution conducted the survey and issued a report, “What it Means to be American: Attitudes in an Increasingly Diverse America 10 Years after 9/11.”

“Americans are wrestling with fear, but on the other hand they’re also wrestling with acceptance,” said Robert P. Jones, CEO of the Public Religion Research Institute.

The results of the survey were announced Tuesday at the Brookings Institution in Washington.

One issue that seemed to divide respondents was sharia law.

Overall, 61% of respondents disagreed that Muslims want to establish sharia law in the U.S.

“2011 has been an enormously active year for this question,” Jones said. “Forty-nine bills have been introduced in 29 states to ban sharia law. We asked the same question back in February, and only 23% of Americans agreed Muslims want to establish sharia as the law of the land. That number has gone up to 30%, so still a minority, but the minority has grown.”

The numbers were also showed a correlation with where people went for their news.

Of Americans who say they trust Fox News the most for their television news, 52% believe that Muslims are trying to establish sharia law in the United States. Sixty-eight percent of Fox viewers believed the values of Islam were at odds with American values.

The report says fewer than one-third of Americans who most trust broadcast news, CNN (20%) and public television (23%) believe that Muslims are trying to establish sharia.

“It’s an emotional roller coaster,” said Dr. Muqtedar Khan, a professor of political science at the University of Delaware.  “I looked at this survey, and I’m really depressed.”

Khan, a practicing Muslim, was particularly disturbed by the attitudes toward Muslims and what he called a misunderstanding of sharia law. “Sharia is just a prop, an attempt to say, ‘we just don’t know and like Muslims.’ “

Eighty-eight percent of those contacted by pollsters agreed that “America was founded on the idea of religious freedom for everyone, including religious groups that are unpopular.”

One year after a Florida pastor burned a copy of the Quran, 95% of people polled said religious books should be treated with respect.

And two-thirds of those polled said there should be strict separation between church and state.

According to Jones, 2,450 Americans were reached by phone for the survey, and it had a margin of error of plus or minus 2 percentage points. THE ARTICLE source 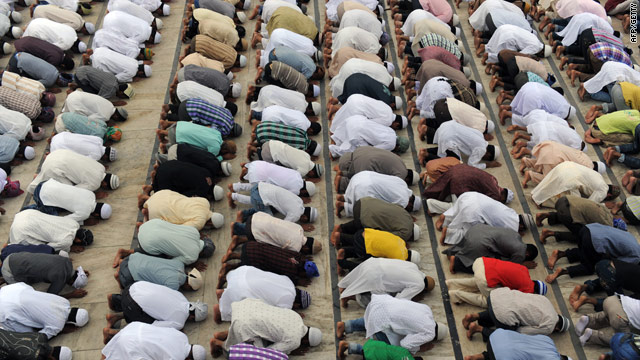 Poll: Americans are tolerant of other faiths — except Islam
Sep 06, 2011 by Lauren Markoe

WASHINGTON (RNS) Americans consider religious freedom a cornerstone of society, but fall short in their tolerance of Muslims, according to a poll released Tuesday (Sept. 6) that probes Americans’ attitudes toward immigrants and the nation’s safety 10 years after 9/11.

The “What It Means to Be American” poll found that a small majority (53 percent) say the country is safer now than before the 9/11 attacks. Attitudes toward Muslims, however, are far less straightforward.

“Interestingly, we find that Americans basically have a double standard when it comes to evaluating religious violence,” said Robert P. Jones of the Public Religion Research Institute, which produced the survey with the Brookings Institution.

On the same question, disparities arose among political and religious groups.

In general, the survey of 2,450 adults paints Americans’ attitudes toward Muslims as a complex picture of acceptance and wariness.

Nearly nine in 10 Americans agree that “America was founded on the idea of religious freedom for everyone, including religious groups that are unpopular.” And by a 2-to-1 margin, Americans reject the idea that Muslims want to establish Islamic law, or Shariah, in the United States.

But they are divided as to whether Islam is at odds with American values, with 47 percent agreeing and 48 percent disagreeing.

The poll’s authors likened this ambivalence about American Muslims to the evolution of attitudes toward Catholics, who were once widely suspected for their loyalty to the pope, and Mormons, once widely reviled for their religious practices.

Brookings scholar William A. Galston said Muslims are now testing the nation’s tolerance, particularly as they try to build mosques.

“The siting of Muslim houses of worship has become the object of great controversy, which really goes right at the heart of religious free exercise,” he said.

The survey also notes differing attitudes toward Muslims between generations, with more than 6 in 10 young Americans (ages 18 to 29) reporting comfort with several expressions of Muslim religious practice, compared to fewer than 4 in 10 senior citizens.

A slim majority (53 percent) takes a positive view of the influence of immigrants on American society; 42 percent said the growing number of newcomers threatens American values.

And while 51 percent of Americans said the nation should make a serious effort to deport all illegal immigrants, when asked a more nuanced question, a majority seemed to oppose such a policy.

Among the poll’s other findings:

— Ninety-five percent of Americans believe all religious books should be treated with respect, no matter the religion.

— Acceptance of Mormons continues to lag behind other minorities, with 67 percent expressing favorable views of Mormons, compared to 84 percent for Jews and 83 percent for Catholics.

— 16 percent of Americans believe that people in Muslim countries have a favorable view of the United States.

The survey of 2,450 adults had a margin of error of plus or minus 2 percentage points. source

← Islamic Center Receives Bomb Threat
A decade after the 9/11 attacks, Americans live in an era of endless war →