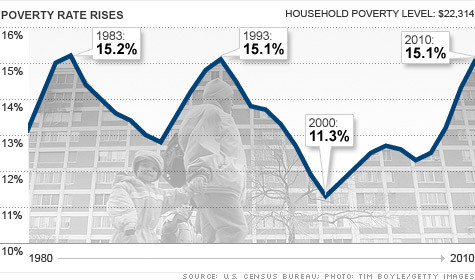 “The results are not surprising given the economy,” said Paul Osterman, a labor economist at MIT. “You would expect with so many people unemployed, the poverty rate would go up. It’s just another sign of what a difficult time this is for so many people.”

About 46.2 million people are now considered in poverty, 2.6 million more than last year.

Middle-class wealth falls: For middle-class families, income fell in 2010. The median household income was $49,445, down slightly from $49,777 the year before.

Median income has changed very little over the last 30 years. Adjusted for inflation, the middle-income family only earned 11% more in 2010 than they did in 1980, while the richest 5% in America saw their incomes surge 42%.

“Over that period of time, it’s not that the American economy has necessarily performed badly,” Osterman said. “As a country we’re richer over that period, but there’s been this real shift in where the income has gone, and it’s to the top.”

Amplifying that trend, the bottom 60% of households saw their income fall last year, while households making $100,000 or more enjoyed a rise in income.

More children in poverty: The poverty rate for children under age 18 increased to 22% in 2010, meaning more than 1 in 5 children in America are living in poverty.

For people 65 and older, the poverty rate was barely changed at 9%.

Race and gender factors: By race, the poverty rate was lowest for non-Hispanic whites at 9.9%.

South hit the hardest: For the fifth year in a row, Mississippi households were the poorest in the country, this time with a median income of $37,985. New Hampshire households had the highest median income, at $66,707.

Among different regions of the country, the South had the highest poverty rate at 16.9%, while the Northeast had the lowest rate at 12.8%.

It does not, however, include capital gains, so, theoretically, millionaires could qualify as poor if they lived solely by selling off investments.

Non-cash benefits, such as food stamps or subsidized rents, also do not count as income. source