President Barack Obama speaks about defense budget cuts during a briefing at the Pentagon January 5, 2011 in Virginia.

What is usually a routine piece of legislation has turned into a controversy between civil rights groups and the U.S. government. President Barack Obama signed the National Defense Authorization Act for 2012, and some of its provisions have proven unseemly to some Americans.

As a whole, the bill details topics such as threat prevention, the inner workings of the Dept. of Defense and various policies for military personnel. The sections that have people talking are 1031 and 1032, which discusses how the government should qualify threats and handle detainees.

According to the legislation, people associated with Sept. 11 and Al Qaeda, as well as other groups and supporters who prove to be a threat, can be detained without trial until the end of the conflict.

The heart of this controversy is the potential for the articles to apply to United States citizens. As a result, several civil rights groups have voiced their concern to the public.

“That is not an American piece of legislation,” said Daniel Massoglia, a member of Occupy Chicago.

The Occupy movement is one of the groups who have vocally opposed the passing of the bill. According to Massoglia, they have discussed it in general assemblies and are encouraging people to contact politicians and the White House.

“We remain committed to spreading the word about this,” he said.Massoglia also claimed he was surprised when Obama signed the bill.

“He campaigned on closing Gitmo,” he stated. “He has been an opponent of civil rights in this country. He expressed reservations in the signing statement. We hoped he wouldn’t, but he did.”

Aymen Abdel-Halim, the communications coordinator for Chicago’s Council on American-Islamic Relations (CAIR), described the bill as a violation of citizens’ constitutional and civil rights.

“This is kind of a widespread action against all Americans,” he said. “What we are seeing is a continued erosion of our civil liberties.”

“That’s essentially what we saw with the prisoners at Guantanamo,” he added.

Before the bill was passed, CAIR held a rally on Dec. 19 to protest it. They chose the date to align with the 220th anniversary of the Bill of Rights signing. Now that it’s passed, Abdel-Halim said CAIR is still committed to educating its supporters.

“We feel that these are issues that need to be taken on,” he said. “This is not strictly a Muslim issue.”

“Personally, my first thoughts were disbelief,” said junior Keith Weber in regard to Obama signing the bill. He was surprised the bill got through with all of the details and believes it goes against what the president initially stood for.

“It will definitely change a lot of people’s ideas,” he said.

Weber also hypothesized that some politicians might not necessarily understand the bill’s text.

“I like to think people are naturally good,” he claimed. “They [the politicians] are acting on fear. The people who created the bill are saying, ‘Oh, you should do all this stuff.'”

However, Weber recognized the other parts of bill that needed to get through, particularly involving military spending.

“That bill dictates what our military does in a year,” Weber said.

He just hopes it can be amended in the future to eliminate the policies on detainment.

“The bill leaves the door completely open,” he added. “There’s a lot of trust being pushed here without any checks and balances.

“The big question comes down to: who gets to dictate this?”  SOURCE 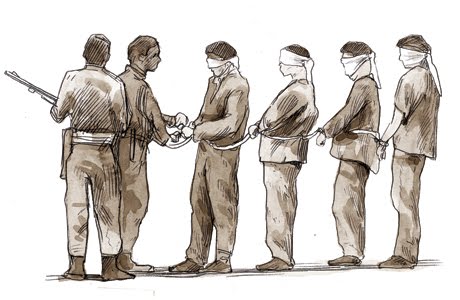