The Maldives has overturned a decision made last week to shut down all spas and health centres in resorts, President Mohamed Nasheed has declared.

The ban followed allegations by an opposition Islamist party that spas were being used for prostitution.

President Nasheed said that he has asked the Supreme Court to decide whether operating spas is against the principles of Islam. 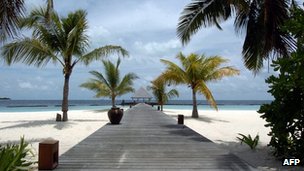 The ruling could be critical to the Maldives’ tourist economy.

The islands are a popular destination for wealthy honeymooners and celebrities where luxury rooms can cost up to $12,000 (£7,700) a day.

“We have lifted the ban and all the services will be available for tourists,” President Nasheed told Reuters news agency. “We wanted to give confidence to tourists.”

The president said that he had ordered the ban in response to calls by the main opposition party, which claimed the spas were fronts for prostitution and led to the spread of drugs and alcohol to locals in the mainly Sunni Muslim nation.

However former President Maumoon Abdul Gayoom said the opposition Progressive Party of the Maldives never asked for the ban. He claimed it was really aimed at “leisure businesses” owned by some opposition members.

The Maldives Association of Tourism Industry complained that the ban would harm the economy. It appealed for a resolution of the issue.

Last week the opposition Adhaalath party, a conservative religious movement, staged a protest in the capital Male against spas, arguing that they were being used as brothels.

The government accused the protesters of trying to exploit the issue in order to cause it maximum embarrassment.

So far this year the Indian Ocean country has received more than 850,000 tourists attracted to its turquoise blue lagoons and spectacular coral reefs with multi-coloured fish.

In December President Nasheed called for a “tolerant” form of Islam in the country amid growing concern about the influence of hardline Islamic parties.  source