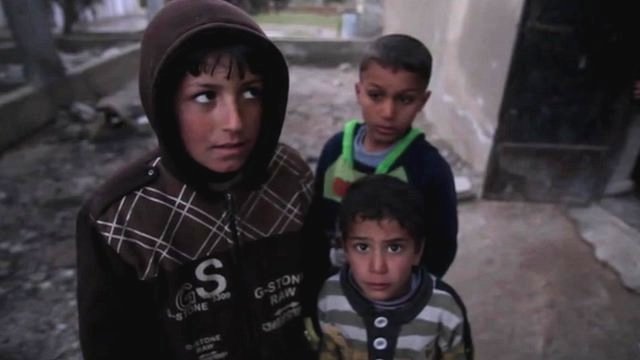 One woman told Paul Wood how two of her brothers were detained, and one was killed

People fleeing the central Syrian city of Homs have told the BBC that security forces are committing atrocities there.One woman told the BBC’s Paul Wood on the outskirts of Homs that soldiers had slit the throat of her 12-year-old son on Friday – a day after rebel fighters withdrew from the Baba Amr district.She said 35 other men and boys from her area had also been detained and killed.The government has denied the Red Cross access to Baba Amr for four consecutive days, citing security concerns.Activists have warned of a humanitarian catastrophe.Electricity, water and communications have been cut off, and in recent days temperatures have plummeted and snow has fallen. Food supplies are said to be dangerously low, and many people are too scared to leave.’Screams’On Thursday, government troops backed by tanks entered Baba Amr after the rebel Free Syrian Army (FSA) announced a “tactical withdrawal”.

A terrible fear has seized people here about what the government forces are doing now that they are back in control.

In a house we sat with six women and their 17 children. They had arrived that day. There were no men.

“We were walking out altogether until we reached the checkpoint,” said one of the women, Um Abdo.

“Then they separated us from the men. They put hoods on their heads and took them away.”

Where do you think they are now, I asked? The women replied all at once: “They will be slaughtered.”

Although the International Committee of the Red Cross (ICRC) and its Syrian Red Crescent partners have since been told they cannot enter the district because of the risk of booby-traps and mines, state TV reported it had been “sanitised” of “armed terrorist groups”.

Opposition and human rights activists have said security forces and pro-government militia have been rounding up men and boys over the age of 14 who are still in Baba Amr, and then torturing and killing them.The claims could not be substantiated, but people fleeing Homs also told our correspondent that security forces had been committing atrocities, including summary executions and cutting the throats of prisoners.One woman, who had walked for three days to escape, said that on Friday troops had taken 36 men and boys from one area and killed them.”My son’s throat was cut,” she said. “He was 12.”Her husband said he was hiding about 50m away and saw one soldier hold down their son’s head with his boot while another killed him.”I could hear their screams,” he added.Another woman said: “They took our husbands. They took them at a checkpoint. They will slaughter them like sheep.”   entire article  at bbc

following video: brutal soldiers of Asad torture and odere a protestor to worship  the pitcure of Phero ( bashar Asad)