BEIRUT/TOKYO (Reuters) – A Japanese woman journalist died of wounds sustained in Aleppo on Tuesday, the scene of heavy clashes between 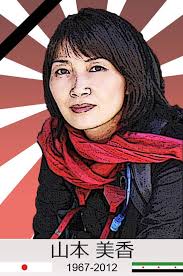 Syrian forces and rebels, a Syrian activist group said in a statement.

Japan Press was not immediately available for comment. Its web site said Yamamoto, who was born in 1967, had covered conflicts in such places as Afghanistan and Iraq.

The Syrian Observatory for Human Rights said the Japanese reporter had been injured in the Suleimaniya district of Aleppo.

The Syrian activist group also said that a Lebanese journalist, a Turkish journalist and an Arab journalist, whose nationality it did not identify, had disappeared in Aleppo.

It was not possible to independently verify the account.

YouTube showed video that activists said was the Japanese journalist’s body at a makeshift hospital.

In Tokyo, a foreign ministry official said the ministry was aware of the reports and its offices in the Middle East are looking into the matter. more at: http://articles.chicagotribune.com/2012-08-20/news/sns-rt-us-syria-crisis-japanese-journalistbre87j0up-20120820_1_japanese-journalist-aleppo-lebanese-journalist