“For too long, the people of this state, including ethnic Rakhine, have faced crushing poverty and persecution. But there’s no excuse for violence against innocent people, and the Rohingya hold within themselves the same dignity as you do, and I do,”
– Barack Obama

US leader says Myanmar is on a “remarkable journey” of reform but has further to go, promising US support and aid.

US President Barack Obama has expressed his support for Myanmar’s “first steps” towards democracy after meeting with the country’s president on a historic trip to the former pariah state.

“I’ve shared with him [the president] the fact that I recognise this is just the first steps on what will be a long journey,” Obama said.

“But we think a process of democratic and economic reform here in Myanmar that has been begun by the president is one that can lead to incredible development opportunities.”

Obama’s visit, the first to Myanmar by a serving US president, came as the government freed dozens more political prisoners to burnish its reform credentials and after the United States joined other Western powers in relaxing its sanctions.

“Over the last year and a half, a dramatic transition has begun, as a dictatorship of five decades has loosened its grip,” Obama said afterwards in a major address at Yangon University during his whirlwind visit.After a red-carpet welcome for Air Force One, Obama met Myanmar’s reformist President Thein Sein and went on to meet the Aung San Suu Kyi at the home where she was long locked up.

“This remarkable journey has just begun, and has much further to go,” he said.

“The flickers of progress that we have seen must not be extinguished.

They must be strengthened.”

Over the past few decades, “our two countries became strangers”, added Obama, who is on his foreign trip since winning re-election this month.

“But today, I can tell you that we always remained hopeful about the people of this country. About you. You gave us hope. And we bore witness to your courage.”

Obama used his speech to urge an end to sectarian unrest in the western state of Rakhine, saying there was “no excuse for violence against innocent people”.

Two major outbreaks of violence since June between Muslims and ethnic Rakhine Buddhists in the state have left 180 people dead and more than 110,000 displaced.

Most of those who fled their homes were stateless Rohingya Muslims, who have faced decades of discrimination.

“For too long, the people of this state, including ethnic Rakhine, have faced crushing poverty and persecution. But there’s no excuse for violence against innocent people, and the Rohingya hold within themselves the same dignity as you do, and I do,” said Obama.

Obama removed his shoes during a brief visit to Shwedagon Pagoda, a gold-plated spire encrusted with diamonds and rubies that is the spiritual centre of Burmese Buddhism.

He later stood side by side with democracy icon Aung San Suu Kyi at the lakeside villa where his fellow Nobel laureate languished for years under house arrest, as the presidential limousine sat parked outside.

Suu Kyi for her part sounded a note of caution about the sweeping changes.

“The most difficult time in any transition is when we think that success is in sight,” she said. “We have to be very careful that we’re not lured by the mirage of success.”

The White House hopes Obama’s visit to Myanmar will strengthen Thein Sein’s reform drive, which saw Suu Kyi enter parliament after her rivals in the junta made way for a nominally civilian government.

The trip is seen as a political coup for Obama after his election victory and a major boost for Thein Sein, who has faced resistance from hardliners within his regime to the rapid political changes.

Obama has stressed his visit is not an “endorsement” of the government but “an acknowledgement” of the reform process.

Some human rights groups said Obama should have waited longer to visit, arguing that he could have dangled the prospect of a trip as leverage to seek more progress such as the release of scores of remaining political prisoners.

The setting for the speech was rich in symbolism. The university was the scene of past episodes of pro-democratic student unrest, including mass demonstrations in 1988 that ended in a bloody military crackdown.

Myanmar unveiled a series of new pledges on human rights ahead of Obama’s visit, vowing to review prisoner cases in line with “international standards” and open its jails to the Red Cross.

Activists said the regime also freed at least 44 political prisoners in an amnesty that coincided with his trip, but demanded more action.

After Myanmar, Obama will attend an East Asia summit in Cambodia as he seeks to recalibrate US economic and security commitments to counter China’s influence at a time when America is disentangling itself from wars in Iraq and Afghanistan. http://www.aljazeera.com/news/asia-pacific/2012/11/20121118171250497121.html 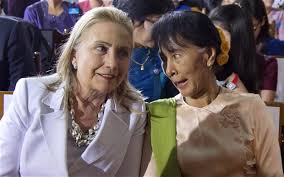