Video: Marijuana Should Be Legalized because it is danger, An Expert said,

Marijuana is the most commonly abused illicit drug in the United States. It is a dry, shredded green and brown mix of flowers, stems, seeds, and leaves derived from the hemp plant Cannabis sativa. The main active chemical in marijuana is delta-9-tetrahydrocannabinol, or THC for short.

How is Marijuana Abused?

Marijuana is usually smoked as a cigarette (joint) or in a pipe. It is also smoked in blunts, which are cigars that have 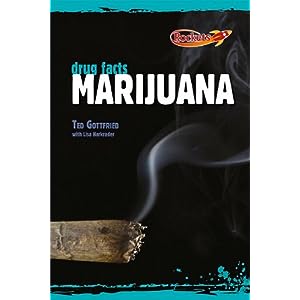 been emptied of tobacco and refilled with a mixture of marijuana and tobacco. This mode of delivery combines marijuana’s active ingredients with nicotine and other harmful chemicals. Marijuana can also be mixed in food or brewed as a tea. As a more concentrated, resinous form, it is called hashish; and as a sticky black liquid, hash oil. Marijuana smoke has a pungent and distinctive, usually sweet-and-sour odor.

How Does Marijuana Affect the Brain?

Scientists have learned a great deal about how THC acts in the brain to produce its many effects. When someone smokes marijuana, THC rapidly passes from the lungs into the bloodstream, which carries the chemical to the brain and other organs throughout the body.

THC acts upon specific sites in the brain, called cannabinoid receptors, kicking off a series of cellular reactions that ultimately lead to the “high” that users experience when they smoke marijuana. Some brain areas have many cannabinoid receptors; others have few or none. The highest density of cannabinoid receptors are found in parts of the brain that influence pleasure, memory, thinking, concentrating, sensory and time perception, and coordinated movement.1

Not surprisingly, marijuana intoxication can cause distorted perceptions, impaired coordination, difficulty with thinking and problem solving, and problems with learning and memory. Research has shown that, in chronic users, marijuana’s adverse impact on learning and memory can last for days or weeks after the acute effects of the drug wear off.2 As a result, someone who smokes marijuana every day may be functioning at a suboptimal intellectual level all of the time.

Research into the effects of long-term cannabis use on the structure of the brain has yielded inconsistent results. It may be that the effects are too subtle for reliable detection by current techniques. A similar challenge arises in studies of the effects of chronic marijuana use on brain function. Brain imaging studies in chronic users tend to show some consistent alterations, but their connection to impaired cognitive functioning is far from clear. This uncertainty may stem from confounding factors such as other drug use, residual drug effects, or withdrawal symptoms in long-term chronic users.

Long-term marijuana abuse can lead to addiction; that is, compulsive drug seeking and abuse despite the known harmful effects upon functioning in the context of family, school, work, and recreational activities. Estimates from research suggest that about 9 percent of users become addicted to marijuana; this number increases among those who start young (to about 17 percent) and among daily users (25-50 percent).

Long-term marijuana abusers trying to quit report withdrawal symptoms including: irritability, sleeplessness, decreased appetite, anxiety, and drug craving, all of which can make it difficult to remain abstinent. These symptoms begin within about 1 day following abstinence, peak at 2-3 days, and subside within 1 or 2 weeks following drug cessation.3

A number of studies have shown an association between chronic marijuana use and increased rates of anxiety, depression, and schizophrenia. Some of these studies have shown age at first use to be an important risk factor, where early use is a marker of increased vulnerability to later problems. However, at this time, it is not clear whether marijuana use causes mental problems, exacerbates them, or reflects an attempt to self-medicate symptoms already in existence.

Chronic marijuana use, especially in a very young person, may also be a marker of risk for mental illnesses – including addiction – stemming from genetic or environmental vulnerabilities, such as early exposure to stress or violence. Currently, the strongest evidence links marijuana use and schizophrenia and/or related disorders.4 High doses of marijuana can produce an acute psychotic reaction; in addition, use of the drug may trigger the onset or relapse of schizophrenia in vulnerable individuals.

What Other Adverse Effect Does Marijuana Have on Health? 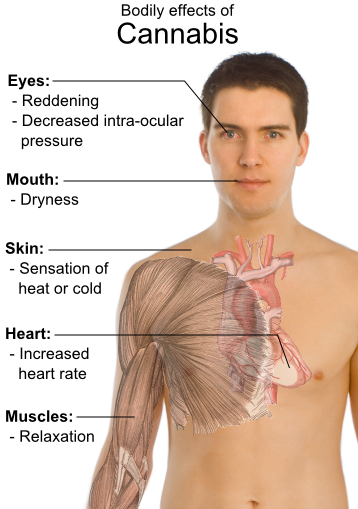 Effects on the Heart

Marijuana increases heart rate by 20-100 percent shortly after smoking; this effect can last up to 3 hours. In one study, it was estimated that marijuana users have a 4.8-fold increase in the risk of heart attack in the first hour after smoking the drug.5 This may be due to increased heart rate as well as the effects of marijuana on heart rhythms, causing palpitations and arrhythmias. This risk may be greater in aging populations or in those with cardiac vulnerabilities.

Effects on the Lungs

Numerous studies have shown marijuana smoke to contain carcinogens and to be an irritant to the lungs. In fact, marijuana smoke contains 50-70 percent more carcinogenic hydrocarbons than tobacco smoke. Marijuana users usually inhale more deeply and hold their breath longer than tobacco smokers do, which further increase the lungs’ exposure to carcinogenic smoke. Marijuana smokers show dysregulated growth of epithelial cells in their lung tissue, which could lead to cancer;6 however, a recent case-controlled study found no positive associations between marijuana use and lung, upper respiratory, or upper digestive tract cancers.7 Thus, the link between marijuana smoking and these cancers remains unsubstantiated at this time.

Nonetheless, marijuana smokers can have many of the same respiratory problems as tobacco smokers, such as daily cough and phlegm production, more frequent acute chest illness, and a heightened risk of lung infections. A study of 450 individuals found that people who smoke marijuana frequently but do not smoke tobacco have more health problems and miss more days of work than nonsmokers.8 Many of the extra sick days among the marijuana smokers in the study were for respiratory illnesses.

Behavioral interventions, including cognitive-behavioral therapy and motivational incentives (i.e., providing vouchers for goods or services to patients who remain abstinent) have shown efficacy in treating marijuana dependence. Although no medications are currently available, recent discoveries about the workings of the cannabinoid system offer promise for the development of medications to ease withdrawal, block the intoxicating effects of marijuana, and prevent relapse.

The latest treatment data indicate that in 2008 marijuana accounted for 17 percent of admissions (322,000) to treatment facilities in the United States, second only to opiates among illicit substances. Marijuana admissions were primarily male (74 percent), White (49 percent), and young (30 percent were in the 12-17 age range). Those in treatment for primary marijuana abuse had begun use at an early age: 56 percent by age 14.**

The potential medicinal properties of marijuana have been the subject of substantive research and heated debate. Scientists have confirmed that the cannabis plant contains active ingredients with therapeutic potential for relieving pain, controlling nausea, stimulating appetite, and decreasing ocular pressure. Cannabinoid-based medications include synthetic compounds, such as dronabinol (Marinol®) and nabilone (Cesamet®), which are FDA approved, and a new, chemically pure mixture of plant-derived THC and cannabidiol called Sativex®, formulated as a mouth spray and approved in Canada and parts of Europe for the relief of cancer-associated pain and spasticity and neuropathic pain in multiple sclerosis.

Scientists continue to investigate the medicinal properties of THC and other cannabinoids to better evaluate and harness their ability to help patients suffering from a broad range of conditions, while avoiding the adverse effects of smoked marijuana.

How Widespread is Marijuana Abuse?

National Survey on Drug Use and Health (NSDUH)***

← Map: The Most- and Least-corrupt Countries in the World
Belief Weighing a Coin! →