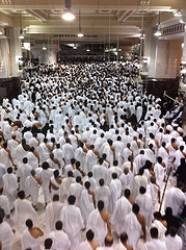 Since these principles were firm and well-founded, they did not slacken with the passing of time nor as generations succeeded one another. During the Khutbah, the Prophet, sallallaahu ‘alayhi wa sallam warned against the fatal disease of Shirk (polytheism) that destroys humanity, disunites it, detaches it from the source of goodness and causes it to be driven by its whims and desires. Therefore, the meaning or focal point ofHajj and indeedthe entire religion of Islam is unity under the name of Allah The Almighty.
During the sermon, he, sallallaahu ‘alayhi wa sallam said: “Your blood, wealth and honour are as sacred as this day (the day of ‘Arafah), this land and this month (Thul-Hijjah).”[Muslim, Al-Bukhari] These are eternal human rights which no man-made law or system can ever dictate or administer. To safeguard people’s blood, Allah The Almighty Says (what means): {There is for you in legal retribution (saving of) life}[Quran, 2: 179]To safeguard people’s wealth, Allah The Almighty Says (what means):{As for the thief, the male and female, amputate their hands}[Quran, 3: 38] To preserve the honour and dignity of humanity, Allah The Almighty Says (what means): {The (unmarried) woman or (unmarried) man found guilty of sexual intercourse – lash each of them with a hundred lashes}[Quran, 24: 2]
Islam is a religion that respects and safeguards life if it is led in a pure and righteous manner, not when it is led in an immoral, oppressive and tyrannical way. This respect would be of no value if it was not supported by a comprehensive and just system which is well-organised.
Islam protects the human being’s right to live an honourable and upright life which is full of peace, security and stability. Islam also ensures that Muslims do not become a source of harm and danger and therefore establishes justice based on the Sharee’ah (Islamic law) of Allah The Almighty; Islam also establishes the power and influence that is required to establish itself as a comprehensive system. Moreover, Islam builds the brotherhood and fraternity between the Muslims that leads to the honouring of rights and obligations towards all; this includes the upkeep of family ties, dutifulness to parents, kindness to neighbours, honouring the rights of marriage and ultimately, relations between nations who are to be judged and ranked by virtue of their piety.
One of the most protected principles in Islam is that a Muslim cannot be unaffected when a fellow Muslim is being harmed in his presence, nor can he allow anyone to insult them in their absence, whether this harm is physical or emotional, by action or by words. Islam forbids hitting others without provocation or right, as well as uttering foul words, mocking, making fun of others and cursing them. ‘Umar ibn Al-Khattaab

narrated the story of a man who used to drink Khamr (intoxicants) often and would be punished. One day he was brought before the Prophet,sallallaahu ‘alayhi wa sallam who commanded him to be flogged. A man said, “O Allah! Curse him for he did this many times.” The Prophet,sallallaahu ‘alayhi wa sallam responded: “Do not curse him, for I swear by Allah I know that he loves Allah and His Messenger.”[Al-Bukhari, Muslim]
Furthermore, Islam not only honours and protects people during their lifetime, but also after death, as it has commanded that the dead be washed, shrouded, prayed over and buried; and all these rituals have to be carried out with all respectfulness. Islam forbids breaking the bones of the dead or damaging corpses in any way. ‘Aa’ishah

narrated that the Prophet, sallallaahu ‘alayhi wa sallam said: “Do not curse the dead for they are facing the consequences of what they have set forth.”[Al-Bukhari]
…to be continued.