A city in Kansas is reportedly demanding $132,000 from the parents of a 5-year-old boy who knocked over a glass sculpture.
The piece of art, “Aphrodite di Kansas City,” was on display at an Overland Park community center when the boy damaged it on May 19, the Kansas City Star reported. He was attending a wedding reception with his parents at the time…more:  news

Urging one’s kith and kin to Obey Allah and refrain from evils Allah, the Exalted, says: “And enjoin Salat (the prayer) on your family, and be patient in offering them (i.e., the Salat).” (20:132) “O you who believe! Ward off yourselves…

END_OF_DOCUMENT_TOKEN_TO_BE_REPLACED

That status needs to belong to the parents.

I recently asked a married couple who have three kids, none of whom are yet teens, “Who are the most important people in your family?” Like all good moms and dads of this brave new millennium, they answered, “Our kids!”…MORE:  readingeagle

The angel said about the signs  – of the end of this world (interpretation): ” …They are that the slave-girl “Mother” (Ibn Hajr- Fath Al Bari) will give birth to her mistress ‘Her kids her will treat her as slave”(Ibn Hajr- Fath Al Bari)  and that you will see the barefooted ones, the naked, the destitute, the herdsmen of the sheep (competing with each other) in raising lofty buildings.” see:  sunnah.com and

At every stage in life, things are pre-ordained a certain way, which we might not like. Accepting them, however, will help us attain peace of mind, writes Sadaf Farooqi. Often since motherhood, I have caught myself critically analysing my reflection…

END_OF_DOCUMENT_TOKEN_TO_BE_REPLACED 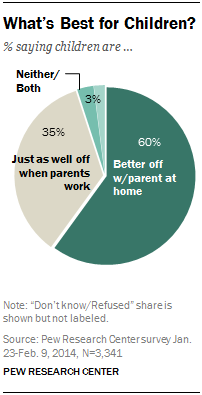 Despite the fact that most mothers in the U.S. work at least part time, many Americans continue to believe that having
a mother who stays at home is beneficial for a young child, though as is often the case with public opinion variations in question wording elicit slightly different responses. A recent Pew Research survey focusing on “parents,” rather than just on mothers, asked Americans which statement came closer to their view: First, children are better off when a parent stays home to focus on the family; or second, children are just as well off when their parents work outside the home. Fully six-in-ten adults chose the first statement and only about one-third (35%) chose the second statement….more: .pewsocialtrends.org

Islam sees a woman, whether single or married, as an individual in her own right, with the right to own and dispose of her property and earnings without any guardianship over her (whether that be her father, husband, or…