She told detectives she had confronted her son over his intentions to put her in the care facility because, he had said, she was difficult to live with…more:  reuters

The organizer of an anti-Muslim protest in Phoenix insisted on Wednesday that his event was intended to be non-violent despite including the sale of a shirt…more: RAWSTORY.COM 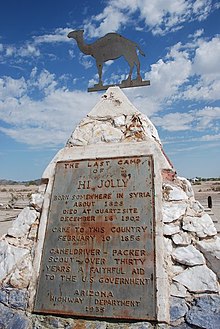 Hadji Ali grave in Quartzsite, Arizona. Hi Jolly or Hadji Ali (Arabic: حاج علي Ḥājj ‘Alī; Turkish: Hacı Ali), later known as Philip Tedro (born ‘Ali al-Hajaya c. 1828 – December 16, 1902), was an Ottoman subject of Jordanian parentage,  and in 1856 became one of the first camel drivers ever hired by the US Army to lead the cameldriver experiment in the Southwest. Hi Jolly became a living legend until his death in Arizona. Once, insulted because he had not been invited to aGerman picnic in Los Angeles, he broke up the gathering by driving into it on a yellow cart pulled by two of his pet camels. MORE:   /en.wikipedia.

(CBS) – Holly Solomon, a pregnant Arizona woman, was arrested Saturday after she allegedly ran over her husband with the family SUV when she learned that he did not vote in the presidential election, CBS affiliate KPHO reports. Solomon, 28, faces charges…