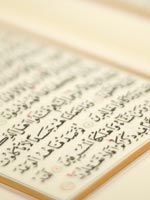 Many people, including Muslims, misunderstand Sharia. It’s often associated with the amputation of limbs, death by stoning, lashes and other medieval punishments. Because of this, it is sometimes thought of as draconian. Some people in the West view Sharia as archaic and unfair social ideas that are imposed upon people who live in Sharia-controlled countries.

Many Muslims, however, hold a different view. In the Islamic tradition Sharia is seen as something that nurtures humanity. They see the Sharia not in the light of something primitive but as something divinely revealed. In a society where social problems are endemic, Sharia frees humanity to realise its individual potential…more: BBC

“And never think that Allah is unaware of what the wrongdoers do. He only delays them for a Day when eyes will stare [in horror].”…more: (Surah Ibrahim )

“Corruption has appeared throughout the land and sea by what they have done that perhaps they will return to righteousness”. more Sura:30

An explosion and fire, Feb. 5, 2012, at the Washington home of Josh Powell, the husband of missing Utah mother Susan Powell, killed an adult male and two children……for more visit the source