BEIRUT/EASTERN GHOUTA, Syria (Reuters) – Abu Mohammad Alaya stands on top of a pile of rubble, still searching for the body for his eldest son more than a week after an air strike destroyed their home in Syria’s eastern Ghouta.Alaya believes 22-year-old Mohammad is buried somewhere beneath his feet, a victim of a war that he says has already killed every member of the football team his son used to play with…more:  (Reuters) 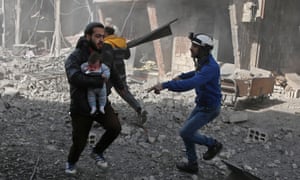 With every child who dies, with every act of brutality that goes unpunished, eastern Ghouta more closely resembles what Kofi Annan once called the worst crime committed on European soil since 1945. Eastern Ghouta is turning into Syria’s Srebrenica. …MORE:  theguardian