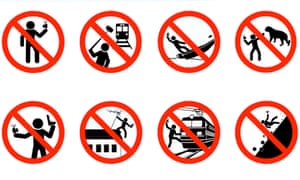 Unfortunately we have noted recently that the number of accidents caused by lovers of self-photography is constantly increasing,” said Yelena Alexeyeva, an aide to the interior minister. “Since the beginning of the year we are talking about some hundred cases of injuries for sure.”…more  theguardian.

A defense attorney for Eddie Ray Routh, who was convicted of capital murder in the “American Sniper” trial, said the fact that some jurors had seen the movie did not hurt their case….MORE  /abcnews.

“Ibn Abbas was asked about one who kills a believer deliberately, then repents, believes, does righteous deeds and follows true guidance. He said: ‘Woe to him can there be any guidance for him? I heard your Prophet say : “The killer and his victim will be brought on the day of Resurrection, with slain holding onto the head of his killer, saying: ‘O Lord, ask this one, why did he kill me?” By Allah, Allah the Mighty and Sublime revealed (reference to the Quran An-Nisa 4:93) it to your Prophet (saw) then He did not abrogate it after He revealed it.” (Confirmed Hadith)

Listen his Islamophobic Statement too…