The Koran’s teachings are better represented in Western societies than in Islamic countries, which have failed to embrace the values of their own faith in politics, business, law and society, a leading academic at George Washington University has said. A study of 208 countries and territories has found that the top countries in both economic achievement and social values are Ireland, Demark, Luxembourg and New Zealand. Britain also ranks in the top ten…more:  telegraph

Tonight we fight for American values at airports all across this country. I’m at Logan Airport tonight to say: our diversity makes our country strong. We will not allow a Muslim ban in the United States of America. #NoBanNoWall #nomuslimban

This inherent contradiction and inconsistency in the government’s approach to the Muslim community was underscored recently when the prime minister lavished all praise and extended every possible courtesy to India’s prime minister Narendra Modi. As Leader of the Hindu Bahartia…

END_OF_DOCUMENT_TOKEN_TO_BE_REPLACED

“These words stand for things I believe in and it seemed like a good opportunity to represent these values and support our diverse community,” said resident Will Jones, whose sign read: “Peace. Love. Compassion. Acceptance. No more fear.” Community and business

leaders, local residents and members of other faith communities gathered in the mosque’s courtyard after the afternoon prayer had ended, some clutching homemade signs and holding them up high to face the constant stream of traffic on Walnut Street…MORE: 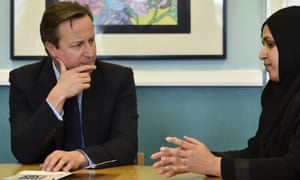 David Cameron and Theresa May’s crackdown on extremism risks undermining the British values ministers want to protect, according to the most senior police chief in charge of anti-radicalisation.

Sir Peter Fahy, chief constable of Greater Manchester police, told the Guardian that the government’s latest plans could be counterproductive, coming at a time when Muslims in the UK feel increasingly alienated….more:  theguardian

orn professor of International Business and International Affairs at George Washington University, believes. Askari says Ireland “leads the world in Islamic values as Muslim states lag.” After studying 208 countries and territories he found that the top countries in both economic achievement and social values are Ireland, Demark, Luxembourg and New Zealand. Britain also ranks in the top ten.  The first Muslim-majority nation is Malaysia ranking at 33, while the only other state in the top 50 is Kuwait at 48….more  frontpagemag

In an unprecedented venture, Sky News commissioned an opinion poll by Survation into what Muslims and non-Muslims think about a range of issues including radicalisation, security concerns, political uncertainty, a rise in hate crimes and growing prejudice.

We asked 1,000 Muslims and 1,000 non-Muslims to share their opinions and found that, while

most Muslims saw their religion as being in step with British values, 16% did not.