Every year, more than 2.5 million Muslim pilgrims from across the world perform the rites of Hajj in Makkah where the Ka’bah is located. Literally, Ka’bah (which simply means ‘cube’) is much more than a cube-shaped building draped in black. It is the symbol of Islamic unity and at the heart of Islam and in particular the principle of Monotheism upon which 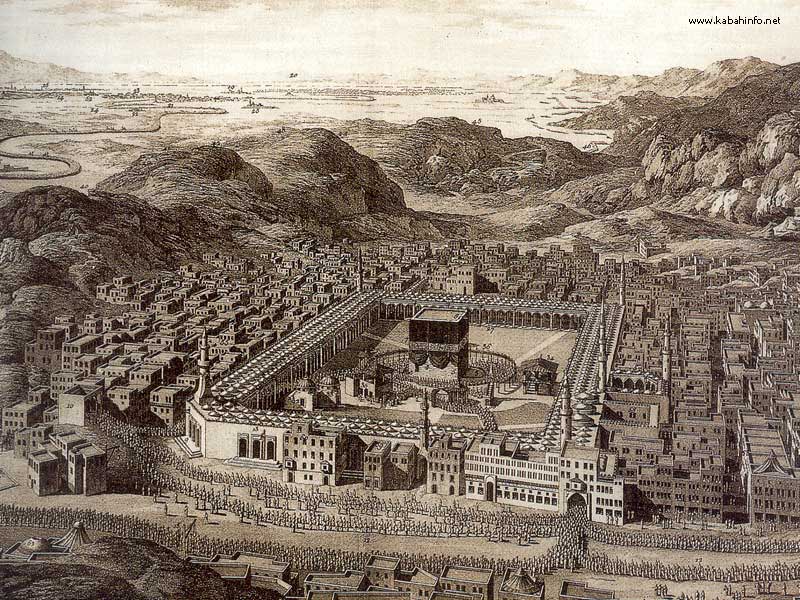 it is based. Referred to as Al-Bayt Al-Haraam (The Sacred House) and Al-Bayt Al-Ateeq (The ‘Ancient’ or ‘Independent’ House) in the Quran, the Ka’bah has a unique place in the life of any Muslim.

The first house of worship
Making reference to the Ka’bah, Allaah Almighty, tells us in the Quran that it was (what means):“The first house (of worship) established for mankind was that at Bakkah (Makkah) – blessed and a guidance for the worlds.”[Quran 3: 96]
Bakkah is an older name for the city of Makkah, one of its meanings is ‘weeping’. According to this interpretation, Makkah was named so because the tyrants and the arrogant weep and become humble within the vicinity of this blessed area. Others have associated the name Bakkah and weeping with the story of Haajar, who felt sorrow and distress as she struggled to find water in the barren land around the Ka’bah where she was left by the Prophet Ibraaheem (Abraham)

to raise their son Ismaa’eel

who was still an infant. There are, however, other interpretations for this name. At that time, the foundations of the Ka’bah had still not been raised by Ibraaheem

as commanded by Allaah (what means): “And [mention O Mohammad] when We designated for Ibraaheem (Abraham) the site of the House, [saying]: ‘Do not associate anything with Me and purify My House for those who perform Tawaaf and those who stand [in prayer] and those who bow and prostrate.’”  [Quran 22: 26]
Here, we see that the purpose of this house was for the exclusive worship of Allaah Alone, without partners. Ibraaheem

had spent his whole life in rejection of polytheism, going against the beliefs and customs of his entire community and its leaders, and even against those of his father, who used to craft idols with his own hands. In the face of persecution and abuse, he

taught the message of Islam – submission to the One and Only God, and never did he tire of explaining the futility of taking false idols. Allaah Says (what means): “Say (O Muhammad), ‘Allaah has told the truth. So follow the religion of Ibraaheem (Abraham), inclining toward truth; and he was not of the polytheists.’” [Quran 3: 95]
The story of Haajar and Ismaa’eel
Describing the background behind the construction of the Ka’bah, Ibn Abbaas

said: “During those days, Makkah was uninhabited and there was no water source in it. Ibraaheem

left Haajar and Ismaa’eel there with a bag containing some dates and a goatskin full of water. When Ibraaheem

started to leave, Ismaa’eel’s mother followed him saying: ‘O Ibraaheem, to whom are you leaving us in this barren valley that is not inhabited?
“She repeated the question several times but lbraaheem

did not reply. She asked, ‘Has Allaah commanded you to do this?
He

said: ‘Yes.’ She said, ‘Then, I am sure that Allaah will not abandon us.’ Ibraaheem

left and when he was far enough so that they could not see him, close to Thaniyyah (a high land), he

faced the House, raised his hands and made the following supplication (what means): “Our Lord, I have settled some of my descendants in an uncultivated valley near Your Sacred House, our Lord, that they may establish prayer. So make hearts among the people incline toward them and provide for them from the fruits that they might be grateful.”[Quran 14: 37]
“Ismaaeel’s mother then returned to her baby and started nursing him. After she had used up the water, both she and her baby were thirsty. She looked at him suffering from thirst and could not bear to see his face in that condition. She ascended the nearest mountain, As-Safa, hoping to see someone, but looking in vain. When she came back down to the valley, she raised the bottom of her garment and ran, just as a tired, worried person would. Then, she climbed the mountain on the other side, Al-Marwah, still looking to see if there was someone to help her. She ran back and forth, between the two mountains, seven times.”
He (Ibn Abbaas)

continued: “When she reached Al-Marwah, she heard a voice and said `hearken!’ to herself. She waited to hear the voice again and when she slid, she said, ‘I have heard you. Do you have relief?’ She found an angel (Gabriel) digging with its heel (or wing) where Zamzam is now, and the water gushed out: Ismaa’eel’s mother was astonished and started digging, using her hands to transfer water to the goatskin.”
Ibn Abbass

said that the Prophet

then said: “May Allaah grant His Mercy to the mother of Ismaa’eel. Had she left the water flow naturally without intervening, it would have kept flowing all over the surface of the earth.”
“Ismaa’eel’s mother started drinking the water and her milk increased for her child. The angel said to her: ‘Do not fear abandonment. There shall be a House for Allaah built here by this boy and his father. Allaah does not abandon His people.’ During that time, the area of the House was raised above the ground and the flooding water reached its right and left sides.
“Afterwards, some people from the tribe of Jurhum who were passing through Kuda (a place) set camp at the bottom of the valley. They saw some birds overhead and were astonished [and said to one another]: `Birds can only be found at a place where there is water. We never knew that this valley had water.’ They sent a scout or two who searched the area, found the water, and returned to inform them about it.
“Then they all went to Ismaa’eel’s mother, by the water source, and said: ‘O Mother of Ismaa’eel, will you allow us to dwell with you?’ She said: ‘Yes, but you will have no exclusive right to the water here.’ They agreed.”
Ibn Abbaass

narrated that the Prophet

said: “At that time, Ismaa’eel’s mother liked to have human company.”
“Thus, they stayed there and sent for their relatives to join them. Later on, her son reached the age of puberty and married a lady from [the tribe of Jurhum]; for Ismaa’eel

learned Arabic from them, and they liked the way he was raised. After a while, Ismaa’eel’s mother died.
“Ibraaheem

came back and found Ismaa’eel

behind the Zamzam well, next to a tree, fixing his arrows. When he saw Ibraaheem

he stood up and they greeted each other, just as a father and son greet each other. Ibraaheem

said: ‘O Ismaa’eel, your Lord has ordered me to do something.’ He

asked Ismaa’eel, ‘Will you help me? Ismaa’eel

said, ‘Yes, I will help you.’ Ibraaheem

said, ‘Allaah has commanded me to build a house for Him there,’ and he pointed to an area that was above ground level.
“So, both of them rose and started to raise the foundations of the House. Ibraaheem

started building (the Ka’bah), while Ismaa’eel

continued handing him the stones. Both were saying (what means): `Our Lord! Accept (this service) from us. For You are the All-Hearing, the All-Knowing.’“ [Quran 2:127] (Al-Bukhaari)
In this manner, Ibraaheem and Ismaa’eel, may Allaah exalt their mention, built the House, stone by stone, going around it, and repeating the same words. The Black Stone, which is located on the southeastern side of today’s Ka’bah and surrounded by a silver frame, is believed to be one of the original stones used by Ibraaheem and Ismaa’eel, may Allaah exalt their mention, in their construction of the building.
Ibn ‘Umar

said: “The Messenger of Allaah

faced the Black Stone, touched it, and then placed his lips on it and wept for a long time. ‘Umar

also wept for a long time. The Prophet

said: ‘O ‘Umar, this is the place where one should shed tears.’” [Al-Haakim]