The algorithm (Al-Khwarizmi: Mohammed bin Musa Al-Khwarizmi)  has authored other

numbers now known as Arabic numerals in the West .. It was not received wide spread among the Arabs .. but spread later in Andalusia and the Maghreb .. From there it spread in Europe and around the world .. Because it is better than the characters that indicate the numeric values in Europe at that time of the difficulty of dealing with it
The algorithm design Arabic numerals according to the number of angles for each number .. It is in the following forms:

Number one .. One angle 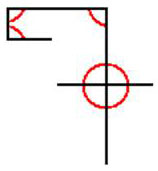 Finally .. The number zero .. There is no angle
Then I entered some amendments to these forms .. Until it became currently known forms

← The Purposes of the Shari`ah
Take Provisions! The Best Provision is Piety →