GREENFIELD — Several hot topics and the state of affairs in general for Muslims in America brought civil rights attorney Tahirah Amatul-Wadud to the Interfaith Council of Franklin County on Thursday at the Second Congregational…more:
RECORDER.COM

In the Glorious Qur’an, Allah, Most High, says, (Those who believe, and migrate and strive in Allah’s cause, with their goods and their persons, have the highestrank in the sight of Allah: they are indeed the successful people. Their…

END_OF_DOCUMENT_TOKEN_TO_BE_REPLACED

A large crowd gathered Thursday night at the South Congregational Church in Springfield to partake in an interfaith prayer service, offering support and expressing solidarity with the city’s immigrant community.

The event comes on the heels of an announcement on June 16 that the church, along with five other congregations, will pursue the establishment of sanctuary spaces in their buildings for undocumented immigrants and families in danger of deportation….MORE: MASSLIVE.COM

WEST SPRINGFIELD – The pubic is invited to an April 5 interfaith discussion at the Islamic Society of Western Massachusetts that concludes a group study of an award-winning book written by an English-born rabbi about the need to lessen intolerance among religious faiths. The concluding gathering for Rabbi Jonathan Sacks’ “Not in God’s Name: Confronting Religious Violence” includes dinner and will be held from 6 to 8 p.m. at the society’s headquarters, 377 Amostown Road. It is sponsored by the Interfaith Council of Western Massachusetts, South Hadley’s Center Church, First Church Congregational, United Church of Christ, and the society….more: masslive.

SPRINGFIELD – In the wake of the bomb threat at the Springfield Jewish Community Center (JCC) on Friday, March 3, the Interfaith Council of Western Massachusetts has released a statement of solidarity with the Springfield JCC and the local Jewish…

END_OF_DOCUMENT_TOKEN_TO_BE_REPLACED

As Boston-area religious and cultural leaders, we are committed to building a community that embraces people of different beliefs and practices, including our Muslim neighbors and friends. This work is particularly important in the present political climate, in which some…

END_OF_DOCUMENT_TOKEN_TO_BE_REPLACED

The Islamic Center of Western Massachusetts and Greenfield’s Second Congregational Church shared a meal as an expression of interfaith harmony on Friday. The Islamic Society invited members of the Franklin County church for a lunch of Pakistani-style food at the Islamic Society’s Mosque in West Springfield….MORE:  wwlp.com

What is the Best Way to Fight Islamophobia? 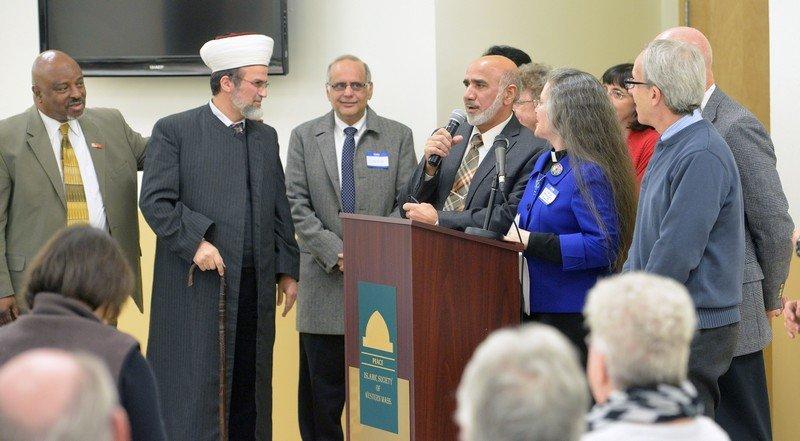