A school counselor encouraged a student to have an affair with his teacher by telling him the same thing worked for French President Emmanuel Macron, a lawsuit alleges. Robert Jost reportedly offered the bizarre advice when the confused 17 year-old, who has not been named, went to him to confess his feelings for chemistry teacher Aimee Palmitessa, 46. A lawsuit filed by the boy, seen by the LA Times, said Jost highlighted the example of Macron, 40, and his wife Brigitte, 65, who was his French teacher at school….Read more: metro

A teacher coerced into giving classes in Xinjiang internment camps has described her forced sterilisation at the age of 50, under a government campaign to suppress birth rates of women from Muslim minorities. Qelbinur Sidik said the crackdown swept up not just…

END_OF_DOCUMENT_TOKEN_TO_BE_REPLACED

Video circulated on social media this week showing a student wearing a hijab and hiding her face while someone removed the religious head scarf, exposing her hair to the class…more: wsmv.com 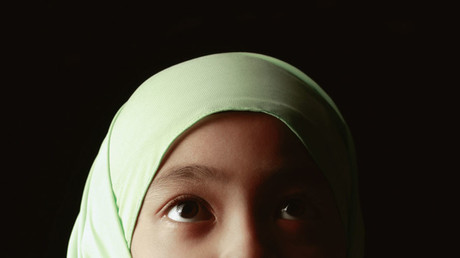 A substitute teacher at a Bronx elementary school was fired after ripping the hijab off an 8-year-old girl’s head because she refused to get out of his chair, cops said.

Oghenetega Edah, 31, demanded that the girl at the Bennington School on Adee Avenue take off her religious scarf around 1 p.m. last Tuesday, cops said.MORE: nypost.com

“While the teacher reports her statements were made in the context of trying to make a point about negative stereotypes, District officials do not believe that the teacher exercised the appropriate sensitivity expected of the District’s educators, and do not believe that the statements were made in a manner that is in keeping with the District’s Core Beliefs and Commitments,” the statement reads…MORE: RAWSTORY.COM
The controversy started when a lesson in World Geography class asked students to try to copy an example of Arabic calligraphy. The phrase was a statement of Islamic faith but the students were “not asked to translate the statement or to recite it.” Rather, the purpose of the exercise was to give students an “idea of the artistic complexity of calligraphy.”…more: /thinkprogress

Stephanie Almonte committed suicide last year after being bullied by her math teacher, a new lawsuit says. A Manhattan father whose 12-year-old daughter took her life last year is accusing her seventh grade math teacher of driving her to suicide, according to a new lawsuit…..MORE: .nydailynews
Page 1 of 2
1 2 »